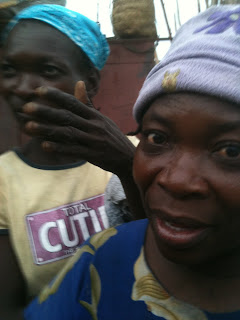 Yes, there are kidnappings, robberies. Killings. Young men and women walk, sit, carry water, sell, peddle, chat, argue in the camps, and in the streets, in the markets.
What is remarkable is that there are no riots. I am told this is because Haitians do not want foreigners to leave. They worry that if too much gets out of hand, the NGOs and volunteers will leave. Somehow, is this keeping a lid on things, on what would be, could be, a Second Haitian Revolution?

I am told: “Some years ago, one of the cell phone companies had a policy that angered many people here. That company wanted to charge for incoming, reception of calls as well as outgoing calls. Well, people attacked the offices of that company. They broke windows. That was for the cell phone company to change its ways. But the textile factories? People here are afraid if they destroy those buildings, those factories, then there will be no work here. So, they march, they marched, they protested, for better pay. But they did not destroy or beak anything. It’s different for the textile factories – people, workers, respect them.”

In July, everyone is absorbed in World Cup games. Cash for Work, run by different NGOs, has some fraction of the population harnessed, busy hauling rubble or garbage. Workers in brightly colored t-shirts or vests, neon green, yellow, shoulder shovels, pails and pickaxes. Slogans, proclaiming “project Concern,” “Habitat for Humanity,” or other slogans of the alphabet soup of non-profits --- and let’s face it, they are doing something, more than the rest of us are doing.

I stay in a cinder block room – share 2 rooms –actually, with an assortment of family. My friend, cousin of my rural family, Michelet, warns me about being careful. Don’t go anywhere alone (Of course, I would not dream of doing this), the capital is a very rough place. Even here – and he gestures towards the benign, if somewhat barren, hills of Jericho, and Jerusalem, the neighborhoods of these Kafou hills where we stay, even here. Be careful. Don’t go far.

But, he continued, do not think that all of these are bad people. The ones who steal, rob. They are not bad people, they are just hungry people. 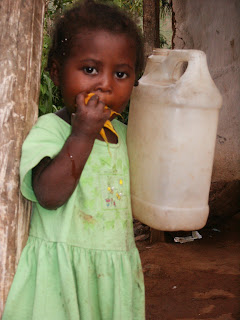