How you gonna get them back on the farm after they've seen Paree? 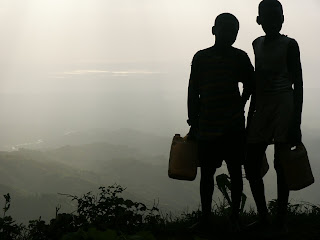 INCENTIVIZE DECENTRALIZATION IN HAITI BY DISPLACING THE NGOS!

'Got to incentivize decentralization.

A way to start might be to first MOVE THE NGOs out of the area of the capital, so the aid, tents, and cash-carrying visitors and, uh, paying guests, NGO CEOs, architects, builders, reconnaissance mission...s, goodwill ambassadors, mission missions HAFTA be put up and Distribute themselves and their cash and donations OUTSIDE OF THE CAPITAL. There's a whole country out there! Have the NGOs live in tent camps OUTSIDE of the capital until they can build themselves some permanent structures - that is, hire Haitian workers to build them, and invite the government ministries to do the same...Once you put the sources of aid somewhere else, displace them, people make flock to other smaller towns so they can access their, uh, share(s).﻿

Then, move GOH ministries, their families out into temporary tent camps as well, where ever you have NGOs and minimal infrastructure to start with. Build new roads, improve old roads, get solar panels and /or DECLCO generators up and running first while the GOH ministers and NGOs sort out the issue around establishing state-run utilities, right where they stand --- out and away from the capital.

Next, invite workers and wanna-be-workers, construction workers and others with or without shovels, to implement NGO and GOH decisions and indecisions, dig ditches and put donated cash to work (finally) erecting semi-permanent or more permanent housing. Put up walls around wranglers to keep the noise down.

Build semi-permanent foster homes for families willing to take in youth and willing also to enroll in programs of early child development, parenting classes and be supervised in foster home care. Supervision and training to be accomplished by Haitian students enrolled in Haitian university classes and/or a contingent from the Peace Corps.

Until you can spare workers to dig latrines, or get the various NGOs and GOH ministeries to agree on a sewage system, let things take their course but import more Port A Potties, rec-cycle those already in Port A Prince. When other regions prove to have more, if not better, facilities, populations may find this enough of an incentive to get a move on, and just follow their noses to decentralized sites.

Figure out a way to efficiently enable hot showers (some young and GREEN-minded visiting NGOS may have just the solar system to enable this) and that should be sufficient incentive for more NGOs - and IDPs themselves - to consider taking the plunge.