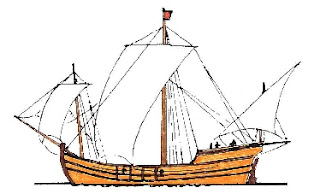 Columbus is not a hero anymore, except maybe in New York, where Italian Americans still have a Columbus Day parade - don't they?
It was in the Oakland hills, California, in 1892, that Joaquin Miller -the Poet of the Sierras, the Byron of the West - composed the poem he is most famous for today, “Columbus,” in honor of the 400th anniversary of the discovery of the Americas.
It's the motion across the ocean, and not Columbus the man, celebrated in the poem.
Joaquin Miller's poem celebrates motion across the unknown, across oceans.  To dream impossible dreams, to explore, reach and yes, reach out...Move mountains.  Maybe we should not throw out Columbus with the  salt water?  Sail on, sail on, friends.
Posted by Randy at 5:54 AM No comments: