IF PIGS COULD FLY - HAITI! 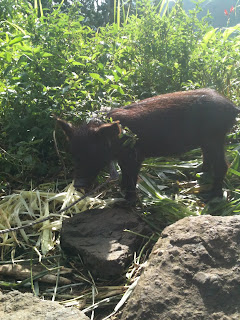 My family, students, friends from Palo Alto Friends (Quaker) Meeting and Congregation Beth Am and  have helped establish and support a small non-profit dedicated to Haiti, 100%.

If Pigs Could fly - Haiti! is not, was not and is not, about miracles or flying pigs. It was a young girl's wish, when she first learned of the debacle of the Kreyol pig - or the alleged debacle of the Creole pig -( terminology depending on how left your leanings) - it was her wish to replace the pigs and piglets, if she could convince her classmates and school, to save coins in their piggy banks, strategically placed in each classroom.

As a French-American child, Marie Josee was unfamiliar with the English skeptical idiom, "When pigs fly..." 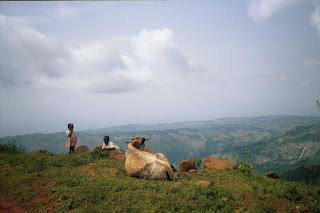 It was just a wish, on the part of one child, that she and her classmates could make a world of difference to the part of the world she loved and called, "My Mountain."

That was almost a decade ago. The girl is now a young woman, the children she played with have grown up. I remember another thought she shared in her film, "My Mountain." She shared with us, her audience, her viewers, "If I come back to my mountain in 10 years, I wonder what will happen to the children of my mountain? Will they still be around? Will they be alive?"

Two are now restavek and living in tents in the fallen city, Port au Prince.
Two have died - a lack of access to a hospital was the likely cause in each instance. Only four children in the film have been able to continue in school - and only because of support from outside the community, support from If Pigs Could Fly - Haiti!

What else has changed? Well, "If Pigs" is now a genyouwhine non-profit, with and EIN, a board, a bank account, a website and a Face Book presence. The needs of course haven't changed, but If Pigs has built - with community participation - a home, rebuilt a school, furnished a classroom and built one of the all-around best school latrines with 20 kilometers!

If Pigs has: started a sewing boutik, supported the purchase of sewing machines, supporting training in piecework, and is looking for a market for embroidered artisan dresses. If Pigs has supported the women's Mammas Making Mamba peanut butter project, which serves locally made and home ground peanut butter to primary school children in two schools. If Pigs works because our team in the community work with us: Toma (Elisee Abraham), Kloteed, Destin, Madame Vab, Gran Dodo, Ti Eli, Pastor Diedonne Abraham and Pastor Felix Abraham. And others.

If you are so moved, please consider a small donation once in a while?  Like, on January 1, Haiti's Independence Day?  Or Haitian Flag Day on May 18?  Or, Christmas, in time for next year's tax season? Any time is the right time to do right, as my mentor Rev. Dr. Martin Luther King Jr. preached in more than one sermon.

In contrast, perhaps, to some NGOs, large NGOs, who have been criticized because their efforts have not been visible, If Pigs leaves more than a paper trail. You will hear from us, and see us, on Facebook. And you are most welcome to visit. Bring strong legs and a strong heart. No experience necessary. Again, as directed by Brother Martin, "Anyone can be great, because everyone can share." Come on up to Morne Bouton, the place my daughter, Marie Josee called, "My Mountain." You will see not just what we need, but what we got. What you and we, together, can build on.

Join us on the mountain top, and find the "Donate Now" button at
www.ifpigscouldflyhaiti.com

You will meet our resident team, lots of details about our projects, and non-profit effort.  We put the "non" in "Non-Profit," as 100% of all donations goes to the effort and the workers in rural Haiti.
--Please know that we have no administrative costs, no overhead, no office expenditures, anyen ditou to expense from your contributions.  Mesi anpil anpil!
Posted by Randy at 5:03 PM