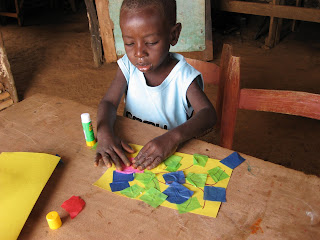 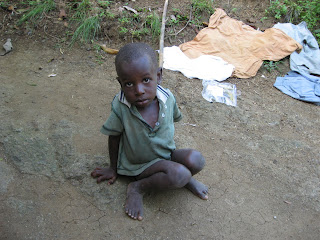 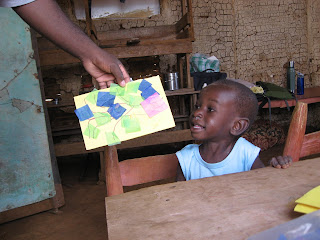 The urchin in the "before" has been transformed into the student with his art work in "After."

See, I made a unilateral decision.

Yup.
Definitely not kosher, and certainly not a first in the history of well-intentioned blan in Haiti.

I decided what Watkliff needed was: School and peanut butter! As he was not yet 4 years old, I had to plead his case with our school Principal, Dieudonne Abraham.

So, after not too long a time, we see Watkliff, in the summer school, and with 2 weeks of peanut butter under his belt, hands on math and art projects, Watkliff has found his metier...See him here, creating with materials he'd never seen and then, how proud he is as his teacher, Principal Dieudonne, looks over his work. 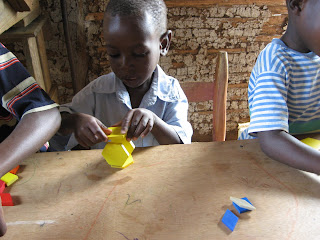 The photos just to the left here are a year afterward. Watkliff has been a year in the Brothers' Abraham School. Tuition is only $55.00 US for the year!

The following summer, I see the Principal and Watkliff interacting, and I observe Watkliff studiously at work. There, he holds a pencil, a colored pencil, grasping correctly and writing, copying. Here, he explores shapes and sizes of geometric blocks. 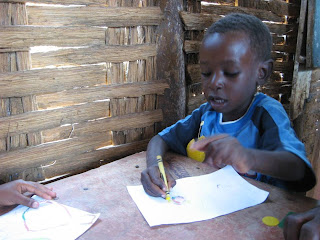 Haiti, here is one of your future engineers!

Principal and Teacher Dieudonne (John)explores measurement of length with linking cubes, (cubes and other stuff, all schlepped up the mountain on the backs of mules over these several years). 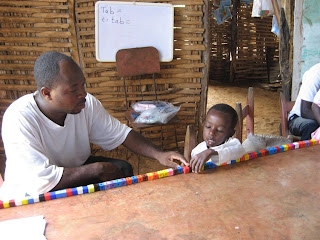 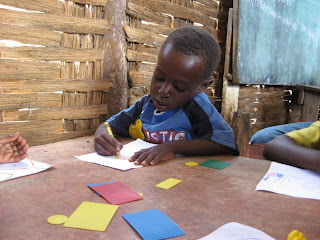 Watkliff is no longer a poster child for Darfur, he now has status.

In Haiti, his status, his social capital, is now that of a "student," a "schooled" child, one who attends school He gets to wear shoes - when he goes to school. Support from www.ifpigscouldflyhaiti.org has provided his family with a goat to raise. If they are successful, they can cover school fees and his shoes. Ideally, this is less of a charity and more of a modest step in the form of "jobs creation" for education.
Posted by Randy at 4:05 PM