Talkin' Turkey in the mountains of Haiti

A day in the life of the lakou-a

Nelson chases the family pet, yon dindon while I fumble with the camera.  They have a wild chase around the expanse of lakou - and I had wondered why the earth around the home was so neatly swept... Ahhh, I understood: clearing away dindon droppings!
Nelson will grip Big Bird between his legs and ride him like a hobby horse! The children are playing, horsing around - ahem - and challenging anyone else to outdo Nelson's antics.  There is a gaggle of girls and boys now, the boys sporting newly shaven heads (lice?  Grooming?  Church?).  A few wear sandals, most wear garish combinations of pepe - old well-worn t-shirts, (where? by who?) some with Disney characters, stripes with plaid or floral.

I bring out a bag of colored rubber bands and we play rubber band races.  Malaki teaches me, explaining the rules, while holding onto his machete with one hand, tossing a ribber band with the other.  Gosh, I sure don't want to mess with Malaki.

Later, Roosevelt serves up a pot of red rice -- rice with a tomato Maggi cube thrown in.  The girls and a baby pile up on one bed with bowls and spoons to share.  Laundry is helter skelter on the other bed.  Kids are busy eating, scraping their bowls.  The baby manages well on her own, miraculously.  Nelson is cheerful, quiet, eating.

No one (else) seems to be in charge.

I wonder about the laundry, shirts and skirts, T-shirts lumped in a pile.

Later, much later, a voisin, a close neighbor on Mon Bouton, shares with me that Nelson and his siblings lost their mother a month ago.  She, Viviane, had been a peddler of banane - to and from the capital, frequently. From lavil, she came home sick, returning to die.

She was the one cholera death here in the mountains.   There were not many.  I am not sure who is counting, but that is what I was told. 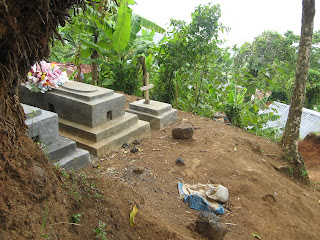 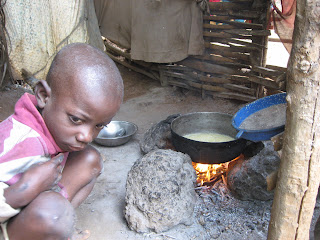 In this way, Haiti happened...and happened to me.