AN ARMY FOR HAITI - OR NATIONAL SERVICE? 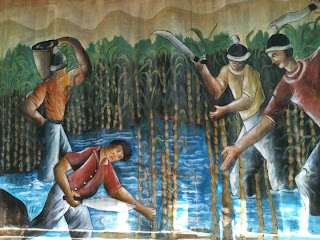 National Service, anyone? In Haiti, the government has been a private industry, a business. A good move now could be for unemployed, underemployed and languishing university grads IN HAITI to take themselves to the hills, andeyo, to share and learn with rural Haitians, implement literacy and use some of that pricey education that their families (and others) paid dearly for.

National Service component would bridge the gap of understanding, build unity, and perhaps, sow not a few seeds of democratic discussion, representation and literacy.
Educated elite are far too cloistered, and the masses of people,disenfranchised, distant and disillusioned.

People make peace, make mistakes, make war, make love, make babies, share knowledge, transfer technology, share and reject ideas, cooperate or not...it is this synergy that has been stymied by class bias and discrimination --- in the ABSENCE, largely, of whites ---- and an ideology of caste that is a ...carry-over from pre-18th century Europe ---in Haiti, relatively isolated during some 200-300 years(and still so).


Got to get those boots on the ground, yes? If not YOU, who? If not NOW, when?

An Army would be more palatable (and yes, to replace MINUSTAH!) if re-construed as National Service, which I believe is in the Haitian Constitution if I am not mistaken ---- how do you get this implemented, Haitianos?
Posted by Randy at 1:16 PM