IMAGINE! YOU MAY SAY I'M A DREAMER...

Imagine!
You... may say I'm a dreamer
But I'm not the only one
...I hope someday you'll join us
And the world will be as one

...Imagine no possessions
It`s easy if you try
No need for greed or hunger
A brotherhood of man
Imagine all the people
Sharing all the world...

And the world will live as one.


PLEASE JOIN
AND SUPPORT THE CAUSE,  IF NOT FOR SOCIAL JUSTICE, THEN JUST PLAIN ACCESS TO WATER IN THE RURAL MOUNTAINS OF HAITI.  BE HERE NOW:

TRIBUTE TO GIL SCOTT-HERON: THE REVOLUTION WILL NOT BE TELEVISED

NEWS FROM THE LET THEM EAT CAKE DEPARTMENT

Haiti: Aid falls short, and the homeless face evictions, and, as if that were not bad enough, there is also a "critical shortage" of hotel space, oh my...


FROM THE ARTICLE: "The DC-based Center for Economic and Policy Research (CEPR) notes that while little is being done for Haiti's displaced population, one US charitable organization is addressing what it calls a "critical shortage of hotel space that meets even the most basic standards for business travelers." The Clinton Bush Fund, which was established after the earthquake by former presidents Bill Clinton (1993-2001) and George W. Bush (2001-2009), is spending $2 million to finish building the Oasis Hotel, a luxury facility whose construction was delayed because of the earthquake. "The Oasis Hotel symbolizes Haiti 'building back better,' and sends a message to the world that Haiti is open for business," according to Paul Altidor, the fund's vice president of programs and investments in a May 9 press release. " (CEPR, Haiti: Relief and Reconstruction Watch, May 6, May 11; Clinton Bush Fund press release, May 9)

A toast to the future of a great people!  Felisitasyons!  Thank you to Bois Cayman, for sending this.
Posted by Randy at 6:53 PM No comments:

DON'T BE STUBBORN, PLEASE KICK IN SOMETHING FOR THE MULE? 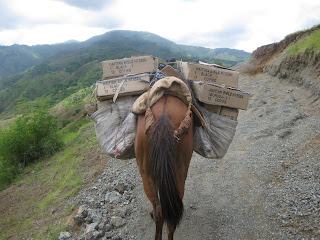 HARD TIMES:  The Mule has died. Getting supplies up to the team is ever more problematic.


This is a severe blow to the community and the fledgling Mamba project, our "Mamas Making Mamba" peanut butter effort which provides work for 5 people and feeds 120 school children per day.


We have already received donations for about 1/3 of the cost (total cost about $600) to replace the mule, and the community will kick in a share as well.
Sple, pense ede nou ak pwojet sa-a? Bet ede kominote nan mon anpil anpil.  Nou deja jwen mwatye pou achte lot milet, epi kominote ap patisipe osi.
Please consider lending us a hand with this?  The price of one dinner out from half of Haiti Next Door's neighbors and friends will make this a done deal. 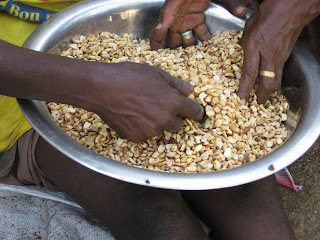 
I'm here in California, in cozy comfort, with a car that runs - just some anxieties about the rising gas prices - and, well, I just wish I was not so alone with this mule problem, that's all.
Posted by Randy at 7:00 PM No comments:

House seeks accounting of aid money to Haiti
(AP) – 19 hours ago
WASHINGTON (AP) — The House on Tuesday asked the Obama administration to come up with an accounting of how humanitarian and reconstruction aid is being spent in Haiti, which has been slow to recover from the devastating earthquake of more than a year ago despite an outpouring of U.S. and international assistance.
"The unprecedented relief effort has given way to a sluggish, at best, reconstruction effort," said Rep. Barbara Lee, D-Calif., sponsor of the legislation calling on President Barack Obama to prepare a report within six months of the bill's enactment on the status of the aid campaign in Haiti, including the fight to combat an outbreak of cholera.
Some of the blame for the slow progress in Haiti has been put on the lack of coordination among foreign and Haiti relief groups, a destroyed infrastructure, absence of a viable Haitian government and corruption. But another factor, Lee said, is "the lack of urgency on the international community's part."
She said that at an international donors' conference in March 2010, 58 donors pledged $5.5 billion to support Haiti's recovery efforts but as of March this year, only 37% of these funds have been disbursed. "This is unacceptable."
The Haitian government says 316,000 people were killed magnitude 7.0 earthquake that struck on Jan. 12, 2010. More than 1 million in a population of less than 10 million were displaced from their homes in the hemisphere's poorest nation.
Rep. Maxine Waters, D-Calif., said 680,000 remain in refugee camps. "We owe it to the Haitian people to find out how much of this money has been delivered to Haiti and where that money went," she said. "We have not always had our act together in Haiti."
Rep. Ileana Ros-Lehtinen, R-Fla., chairwoman of the House Foreign Affairs Committee, said much progress has been achieved in the past year, such as increased access to clean water. She said the Interim Haiti Reconstruction Commission has approved 86 reconstruction projects accounting for about one-third of the total pledges made by international donors last year.
But she also stressed the need to determine that the aid effort "is not being derailed by waste, duplication or corruption."
The bill, passed by voice, now goes to the Senate.
The bill is H.R. 1016.
On the Net:
Posted by Randy at 10:48 AM No comments: 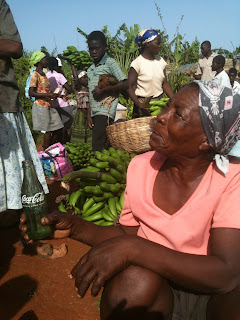 What with concerns about cholera and Delhi- belly, selling Coca Cola and bottled soft drinks in Haiti could be a booming business...

We are trying to improve access to water, and have treatment systems at the end-user sites.  It is, after all, more than 200 years since 1804 and slaves were freed...yes? 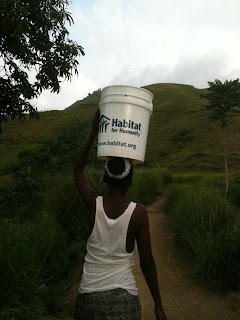 It would be great to have support for the effort to improve access to water.  We are shipping solar panels and water pumps to help this community of 800 people.  Here is a 2 minute video clip of the equipment in operation at our demo event on Earth Day, in Sunnyvale, California:
DEMO on EARTH DAY of solar-powered water pumps


If you would like to join us - on the ground and/or in digital reality, please check out the Causes page:

IF PIGS COULD FLY HAITI WATER ACCESS
Posted by Randy at 2:27 PM No comments:

Sing! From Every Mountain Side, Voices Ring

It had just stopped raining.  On a tin roof, rain makes a din and all we can do is sit in silence.

I hear...what is that?  Incredible chanting, angels' voices, singing. The music is wafting across the lakou, past the rubble and broken cinder blocks of the mountain's Episcopal Church - it never was finished, even before the earthquake finished it off.

I follow this...unbelievable song... to the one remaining sturdy school building. Peer in with me, bear with me this raw footage (I should reduce it to sound simply) -- peer in and listen. The link below is a short clip of the choir at the Episcopal Church, Mon Bouton.  It's one of the three churches that line the path - now, a road - up from La Rivye to our zone. Apologies for the videography, they shook me to my foundations.

There's the choir master, and the sound like a metronome. There's dedication, spirit, commitment and harmony.  What more do we need, friends?

We are in the mountains of rural Haiti, a few months post earthquake, up at 3500 feet, no roads, no shoes, no water unless you carry it 30 min. on your head from somewhere up or down, no electricity, occasionally there's fuel for a generator the pastor might crank up for a major soccer game on a tiny TV.

And still they sing! 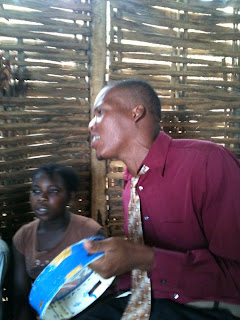 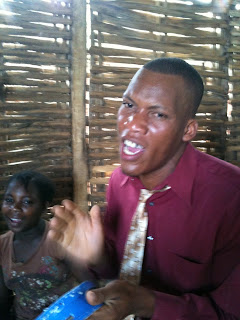 Those who worship carry away with them
more than they bring
for they find there the light to illumine
their lives.- Ruth Brin 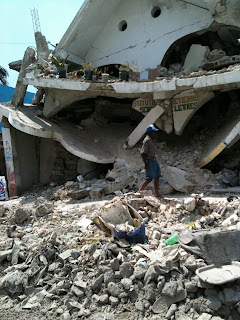 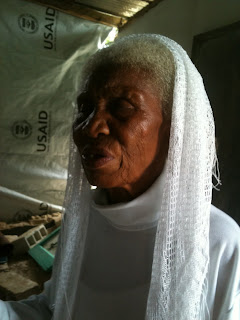 TO DELIGHT IN SIMPLE THINGS

"Teach us to delight in simple things.
And mirth that has no bitter springs;
Forgiveness free of evil done,
And love to all men 'neath the sun."
--Rudyard Kipling 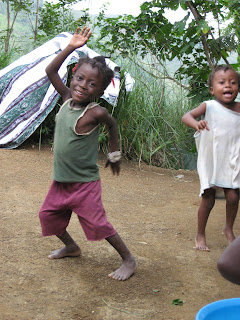 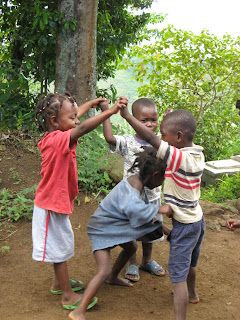 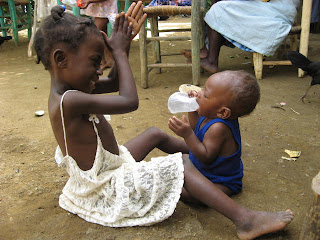 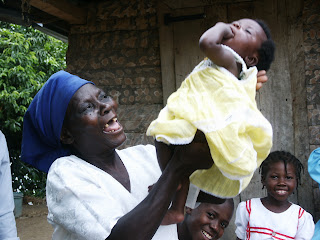 And love to all men 'neath the sun.
Posted by Randy at 1:34 PM No comments: