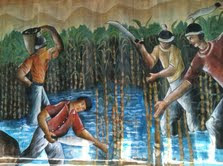 Since the time of Columbus, merchants from Venice to Shanghai have tapped into the needs of colonial and post-colonial inhabitants of Haiti. This was business - this was - and still is - the way to make money from a developing country. Well, euphemistically, "a developing country," because indeed, the shackles of addressing needs and transforming them into wants may be one of the factors behind a country such as Haiti not developing at all.

In market stalls, and baskets lining the streets and warrens of the capital and the smaller cities, one finds everything from toothpaste to batteries, fuses, cosmetics, disposable diapers, cuticle scissors, tin pots and pans from China, towels from the DR, plastic sandals, antibiotics, children 's vitamins, Styrofoam sandals and Cornflakes.

When Oxfam shipped and trucked blankets, tools, cooking pots, water buckets, work gloves, shovels and wheelbarrows over to the river by Fayette in our zone, several hundred people trekked down to get what they could, and could carry, and made their way up some 3000 - 4000 feet of dirt paths. These were not just useful items to replace losses from the earthquake, these were valuable assets. This latter point is not much appreciated, let alone understood, by Oxfam and other NGOs.

Not to say this is a bad thing! It's a biznis - people port the stuff on their heads, distribute it to the hinterlands, and nobody works for nothing in Haiti anymore, not since 1804. It just needs to be understood as a distribution system, a business. 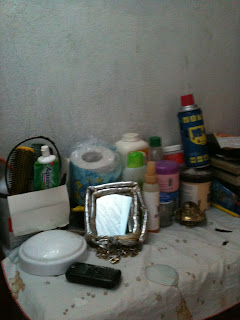 What with t he outbreak of cholera, I would not be surprised to soon find tubing, catheters, drips and treatment tablets soon finding their way on sale, strung up along with pepe, old clothes and resold shoes.

This didn't start with the NGOs. It's a time-honored part of a Haitian entrepreneurial mind-set. rooted in the early mercantilism of 18th and 19th century Europe and America. And now, of course, Haitians themselves have a share of the bounty and live in the bountiful former colonies themselves. Everywhere up along the East Coast of the USA, shipping containers are bought, rented and shipped, by Haitians for Haitians in Haiti. Goods - even non-perishable foods and so-called disposable diapers - are shipped and received by families in Haiti. perhaps someone can enlighten me on the freight charges on such containers when they arrive in the port? And what does it cost for a container to go, say, from Providence, Rhode Island, to Port Au Prince?

And is this the end of it? Are the foods and items simply for personal consumption? Hell no! If you are savvy - and of course you are, or you wouldn't have survived in Haiti since 1804 - you market, you sell whatever you can spare from the containers. With your 100% profit, you buy beans and fresh foods or whatever didn't come in the container.

WHO PROFITS? Well, surely the owners of the shipping companies! And yes, there's a sort of a trickle-down effect, you might say. But, when all is said and done, and Haitians here are spending their hard-earned wages to buy stuff and then pay to ship it, and then also send remittance dollars to their families...who then use the dollars to buy stuff...the upshot of this circle is that the money goes round and round and nothing much gets made in Haiti, and the dollars come back here.

I don't k now if this explains everything about the Haitian dilemma - why there has been no change for decades. But I do recall that around the time of the Cacos, in 1915, a statesman corresponding with US Marine, Smedley Butler, opined that it was time "to create another set of wants." Thus, needs were not enough. And thus began the effective economic occupation of Haiti (and elsewhere) that continues today.

USE IT? This system isn't about to go away; new wants are being created - and shipped - all the time. The solution is not in the stars, but in ourselves: Can we use this system of needs and wants and build on it to build Haiti better?

GOT QUESTIONS? We do too. Stay tuned for more from, "The Shipping News," on the blog.
Posted by Randy at 7:28 AM