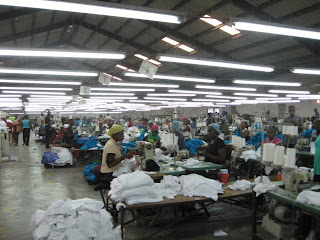 Our team from the countryside also sat down with a human rights lawyer, in the course of our interviews. We all learned what the law is: A minimum wage in the textile industry is 125 goudes/day, distinct from the 200 goudes/day ($5 US) in other sectors, as set after several months’ discussion in the Haitian governmental ministries.

In the city, a worker told us, “Yo te goumet anpil ak salaire minimum.” - “They argued quite a bit in the government about the minimum wage.”

Initially, a textile factory worker earns less than a street cleaner in “Cash For Work.” The Cash-For-Work program, not exactly doing the job of clearing debris and disposing of garbage elsewhere besides city sewer, pays the minimum of 200 goudes, about $5 US/day. However, I have been told that this program is for a 5 hour day. Sounds good? Well, not exactly: Workers only get to work for two weeks, then they are rotated out so others get a job.

In contrast, a stable job in a factory – even though it is an 8 hour day, 6-days a week position - seems a dream job.

Rony, a young man from the countryside, talked with us at length about factories and what the base pay, and cash for work pay, meant to him. He felt that factories do not pay enough to meet one’s needs. He felt that the 200 goudes/day from Cash For Work could easily be spent just on food alone. (I have seen what he eats, so, I can tell you that he is not exaggerating!) 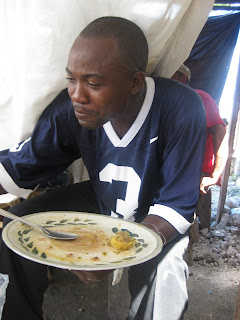 On the other hand, Rony says, “Tout faktori pa fonktione mem jan.” Not all factories work the same. There are differences, differences in pay, hours, days, schedule and so on. He had friends who worked in factories, and had a good deal to say. But, to him, it is the bottom line, the pay, that matters. Everyone in our sample of workers agreed on that.

Bonuses/Incentive Pay: Workers, novices and experienced, get paid bonuses after they meet a quota (dozens of boxes, say, of finished garments) on a daily basis. A plant manager exlained that, “The incentive system works best here, we have found.”

The amount of the bonus can, and does, vary from one factory to another. So, instead of getting 125 goudes (or about $3.00 US) per day, a worker on a successful team has the possibility to earn more than this minimum. Here is how it might work:

Does this work? In fact, workers told me over lunch that they had difficulty usually meeting the quota. Since the assembly work is done in a team – which can included 12 to 15 people – there is plenty of room for human weaknesses, if not errors. Additionally, some of the machines – which are, according to one plant manager, 40 years old – do break down or have problems. That plus worker fatigue or lack of esprit de corps seem to get in the way, frequently, of workers earning more than the minimum 125 goudes/day.

Workers really did not like the incentive pay system. Many perceive that the rates are intended to cheat them.

One of the plant managers shared a similar sentiment. He thought the workers did not want an incentive pay system, but he added that it certainly worked at his factory, where they were exceeding their quotas quite often.

Work week: Theirs is a 6 day work week, or, in most factories, Saturday is a half-day - a 5 1/2 day work week. Sunday is a paid day, at the minimum rate. However, there is also occasional Sunday work mandated. If workers are asked to come in on Sunday, food and drinks are provided.

Marline’s Work Day: Marline, my hostess at Delmas 6, has worked in her current factory job for 3 years. She gets up before 5 a.m. to bathe and dress --- This is a bigger deal here in Delmas 6 than you might imagine; water has to be carried in a bucket from a communal tap a ways down the paths that wind through the tin and cardboard structures put up after the earthquake on Jan. 12. At night, if you need to pee, there is a pot de chamber, a basin, for your, uh, convenience.

Pay Day: Workers say they are paid every “quinzaine” – every 15 days, or twice a month – in cash. When I inquired about the security of workers going home with this cash on payday, the responses were that thieves respect the factory workers’ hard efforts and therefore, do not attempt to steal from them! Another added that, “People who steal are not always bad people. They are just hungry people.”

This implies, of course, a “Robin Hood” effect and the most vulnerable to crime, of course, are the upper and or working classes in Petionville, Tabarre and Kenscoffe. Gated, and locked, and securely impenetrable, well beyond all the riff raff.

Workers on their earnings: Interestingly, none of the workers criticized the profit, the amount of profit, which factory owners reaped. Perhaps because everyone seems to have grown up in an entrepreneurial spirit, none begrudged the owner. Although, naturally enough, most workers felt more pay is certainly desirable, none suggested that owners would have to lower their profits for worker wages to increase.

How did they manage, then, we asked. It was explained over and over, and observed as we shadowed Marline and other workers for a day or half day: workers ate less, or ate less often. Although they would, for example, describe and itemize the costs of each of say three meals, we did not observe any workers, nor families, nor children, having 3 meals a day. In many instances, we observed and/or shared, the single meal, with perhaps bread and coffee (in the city) on the run.

Those who labored in the streets (Cash For Work) or fields (Hired-on Day laborers) sometimes got a meal, or bread and coffee and a meal, as part of their remuneration.

Workers outside of factories, “ti machan,” shoe shine boys, peddlers of goods (shoes, sun glasses, pastries, water) made out that they had opportunities to earn more than a factory worker, and that they’d rather take their chances as an “independent” on the street, than in a factory job. The “shine” boys spoke of the occasional shoe repairs they did as boosting their daily incomes several times higher than what they heard factory workers earned (they cited 500 goudes as a day’s income, “on a good day.”)

“Niveau” workers, those who has just started, had been on the job say 3 months, just since the earthquake, said they were happy just to have a job. This included a young man, as well as several young women. “My earnings will at least keep me alive,” was one comment, and I asked this young man to repeat it, as I wasn’t sure I’d heard that quite right.

For most of the workers we interviewed, they felt that their pay was simply okay – even though it didn’t quite meet their needs. There was acceptance. Some indicated they simply had to make do with what they had; some were more vociferous, citing education costs of children and increased food costs. I was surprised that there was not more resentment.

After some weeks of pondering, I realized that, besides tightening their belts, buying less and eating less - and less often – most city residents, whether they worked in factories or not – had other sources of income. Chiefly, one other source of income: remittance payments from lot bo are a mainstay of the Haitian economy. The low textile factory minimum wage was something government and factory owner could afford to settle on, given the considerable safety net from Haitians overseas.