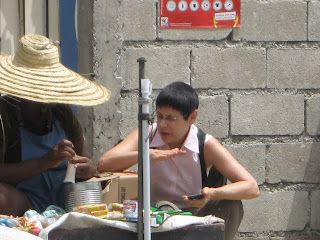 Earning a Living as a Market vendor, Industrial Park

We – Toma and myself – camped out for some days over at the Industrial Park (SONAPI) workers’ outdoor market cafeteria. Generally, workers were eager to talk to us; many thanked us for our interest in their lives and work.

It felt comfortable sitting in the shaded dining area, and our drinks were humungous with chunks of ice. And fresh. People were interested in us, and we were interested in them, so that worked very well! I was surprised at how articulate and easy to talk to everyone was, both young and old. Very forthcoming and, it seemed, honest.


My first friendly connection was with a “ti machan” vendor who sold this and that snacks. She sent someone around to find out if anyone was still selling coffee at 10 a.m. – it seems I was a bit late for the usual service, and they don’t keep it going all day. She sold peanut butter in small packages, she has a bit of “biskwit” (hard tack, is what I call it) to go with the mamba (peanut butter) and with the coffee (not at this hour) and small tins of condensed milk; plastic individual packets of ketchup to put on spaghetti; chips; boxed juice drinks; cigarettes (singly); matches and the usual 5 goude packets of crisp coconut cookies. All of this made in the D.R. except for the matches.

She had done factory work, she told me, a long time ago, but she went back to “ti komes.” How did she get into it? A relative, a cousin. (Everyone gets a job through “knowing someone” – from factory worker to ti machan to Cash for Work: It’s who you know…) She likes to be her own boss, and also, sitting all day in the factory was dull. It seems she wants to tell me she makes more as a ti machan than as a factory worker, but she doesn’t want me to think she has a really good living from it.


“So, you have to pay for the right to sell in this place?” “Oh, yes, I have to pay a lot. We all have to pay. So, after I get done paying for that, and my transportation, and the storage locker, “ she points across to the other side of the shaded dining area, “ well, after all that, and a bunch of kids, I just about break even.”

I hear this a lot of the time. A lot. I don’t suppose the beating around the bush responses are unusual anywhere; I mean, after all, back in the , how many of us answer straightforwardly the question, “How much money do you make?” Even the forms we get online give a range, not a specific amount.


In fact, though, the ti machan get all the goods they offer for sale on credit from a gwo machan or Madam Sara. So, at the end of the day or the week, they pay for the merchandise. Still, nobody would be out here day after day if they didn’t make a bit of profit, right?

I say as much to her. “Surely, you make a bit of profit every day?” It is hard to get precise numbers here. Toma endeavors to help me, but we always run into the way I frame the question, “Chak jou,” (Every day or daily) when people have to calculate weekly, or more, what their “benefis” will be.

Does she make as much as a factory worker? Well, that depends, she says, on what day, and on which worker and what company they work for. It depends.

I get this a lot too. I have to take that for an answer, for today at least.