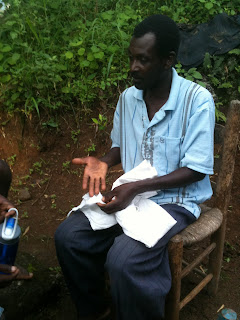 What Workers Shared in Interviews


First off, nobody makes as much money as they deserve or need – here or in , folks feel the same.

That being said, it is not difficult to calculate that a Haitian textile worker’s typical wage is still not a “living wage,” but rather, a “survival wage.” However, factory workers as well as those working, peddling, or hustling in other sectors still say that a factory job is still a good job, because, after all – it is a job.

To further clarify: even if the job just pays you enough to eat and get to and from the work site, it is still a good job. For the rest, you degaje – you get by, you figure it out, you manage.

One seasoned fellow said frankly, he’d rather have this job in the factory than die.

“Pito ou travay pase mouri.” His earnings, he iterated, were enough for him to eat and get himself to and from work, with not much left over. This expression, to have factory work was better than being dead, was echoed by others on other occasions, not in a mean way, just very matter of fact. 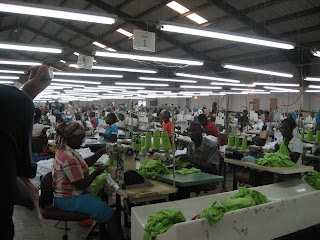 Veronique, a textile worker, told us, “Travay se libete.” (A job is freedom!) I am not sure American workers – and not all Haitian workers- would share Veronique’s enthusiasm.

Just like the rest of us, and people everywhere, Haitian workers, in and out of factories, wanted to earn more. To my surprise, most factory workers did not emphasize, however, that they were being treated unfairly. There were a few exceptions:

A young worker sits down with us at our table as we are looking at a list of “Good” textile factories in SONAPI, compiled for us. This is a list of companies who are following the law, regarding minimum wages, at least. The worker points to one, where he works, and tells us that he doesn’t always get the bonus pay when his team meets the quota. He was the only worker to be forthright, in the context where we sat. Now, of course, most interviews were held in the Industrial Park, with other workers around. Other interviews, held in homes in the center of the capital, allowed for more expression. We heard dissent, but not vociferous resentment.

The main concern was (no surprise again): money. The main issues were the base pay, low overtime pay and the quotas. Workers made suggestions about what the minimum wage (before quota incentives) should be, and gave good reasons (cost of food being the most frequently cited). Overall, workers were not vehement. Information about pay was offered matter-of-fact. To my concealed astonishment, there was no grousing about working 6 days a week, either. This, it seems was a given. I recalled the Haitian proverb that goes something like, “If you want to be able to afford to live, you must work.” There are actually a number of such sayings in the oral literature.

Dissatisfaction wasn't about heat, lunch breaks or even the commute. It was just: lajan.

An experienced factory worker, who has worked in the same textile factory for 3 years, lives with 7 people in his household. He feels 250 goudes should be the minimum wage; explains that he pays 20 goudes for the two tap taps just to get to work, so round trip that eats up a lot of what he earns now (200 goudes to 300 goudes depending on if his team makes the quota). That is, round-trip transportation is 1/5 of his pay! On the other hand, gasoline at this writing (July 2010) is 38 or 39 HD$ per gallon or almost $5.00 US!

I’m also thinking they rarely get the 300 goudes/day that he has mentioned as possible if he makes the quota. Another team member, Lionel, concurs with me. When they don’t make the quota, I ask, what happens? He tells us, he is “ ka.” (Deep shit.) So, we ask why they don’t make the quota? He replies that sometimes a machine breaks down and they have to fix it, or sometimes people are just tired. Overtime (20 goudes/hour) is too little and people do not want to stay late, he adds.

Why can’t teams consistently make the quota? It is not usually a matter of worker’s laziness, or fatigue, or failings, apparently. From a plant manager, who has spent his whole working lifetime in with a family business in textiles, tells me that yes, the machines break down and it can be difficult to get parts for them. When they have to stop, fix a machine, substitute another one, it cuts down on productivity.

Some of the machines, he says, are 40 years old. By this time, I know enough, sense enough, not to ask the plant manager why they don’t purchase new machines. 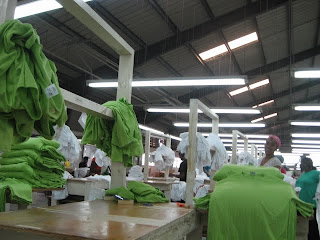 Teams often don’t make the quotas, but they stick it out. Toma tells me of another proverb that goes, “Pito ou travay pase mande, “ or – It is better to work than to beg.” The earnings are low – even for .

Nobody has to explain things to me at this point. Toma is quiet. We get ready for another interview, the next round of questions. I am beginning to understand that it’s about getting by, making do and not about making a living. If you have a job, any sort of a job, you will be able to eat. No difference, you say, between here and there? The difference here is: there are no safety nets. In the city, in the streets, you can take your chances. Somebody will need water carried, a slop jar emptied, a baby tended, clothes washed. You can get a job somewhere, somehow, in the streets. And if you get a little something, why, then you eat. In the countryside, you don’t get such chances.

The city streets are not scary – they are your hope, your safety net. If you can hustle, you could get by. Everyone here is hustling. It is not about making a living, it is about surviving, eating today - and maybe even tomorrow. 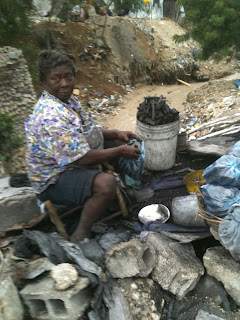 This is, even after 10 summers of experience, enlightenment for me. Being here is not just about being poor. Being poor is about not having enough money. Being here means not having the means to make money.

Now I begin to feel maybe I can put some pieces together.