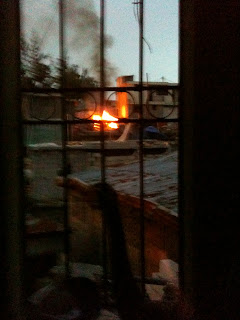 Generally speaking, shelter --- crowding and earthquake debris aside --- is less of an economic problem than food costs. Although visitors are likely to be uncomfortable in housing that Haitians tolerate, find acceptable, the prices seem about right.

Many Diasporans have assisted with the building or renting of homes for their relatives, whom they visit from time to time. It has made sense to invest in housing, be it ever so humble, there's no place like it. It does seem like a good deal of the "hot" property (literally and metaphorically) in the capital is linked to the Diaspora, one way or another, somewhere or the other. This is what got me thinking, really thinking, about what kept Haiti - or at least the city - going... 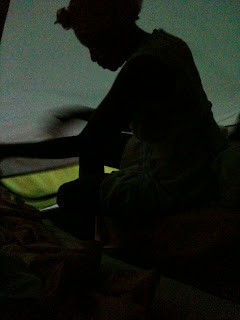 Some, lotsa, Port au Prince families were “squatters” before Jan. 12; others live in homes they have inherited, on land they have inherited. Many households are “home” to family from the countryside – who come and go with agricultural produce for city family to sell or consume. Many residences also serve as centers for small, cottage industries and home businesses, or as “depots,” storage facilities for family or neighbors engaged in commerce. Your house – or your tent – is part of your “capital” and the attitude seems to be to keep it all working for you to generate income.

Not a bad notion, when you think about it.


We sampled workers in and around the city and the “suburb” of Kafou (“Carrfeour”) – actually, it is less of a suburb now and more of the metropolitan sprawl that is Port au Prince. Let’s start with the cost of renting a place to camp with a tent. Haitians displaced by the earthquake, as well as those whose homes remained standing, received all manner of tents and tarps after Jan. 12.

Tenting in Delmas 18. Madame Soirelis pays 550 goudes for 6 months for the place to put her large tent. Or 1100 goudes/year, just US$27.00. For a spot to squat in prime Port au Prince real estate, it is not bad. And the water pump is a stone’s throw from her tent. She has a foyer, entry room, big enough for several plastic lawn chairs, a table laden with items for her “ti komes” – boxes of spaghetti, canned milk, bags of cornflakes and other dry goods. Through the portal, there is another large room big enough for a double bed and more. The bedroom has high ceilings and is a fairly good size large tent. Madame S. shares this space with Dieula, age 14, a relative from the countryside who has lived with the small family for about a year. Madame S. two year old is asleep on a blanket in the foyer. A large standing fan whirs and, as usual, a television and radio are both on. It is the time of World Cup Soccer, and most Haitian fans know that the radio commentary is superior to that on TV, so if both media are available, that’s the way to go.

Housing further downtown, in a tin-and-cardboard box in a maze of other such boxes, runs a bit more than a tent placement.

Tin box studio in Delmas 6. Marline tells us she pays 2000 $HD/year ($250 US) for her tin box, a room large enough for a narrow bed, a table, and a television, with a small window. The bed is immaculate, with a bright clean sheet pulled tightly. Stuff. The walls are hung with clothing, back packs, shopping bags, a rack of shoes, plastic bins with nail polish, toenail clippers, polish remover, soap, feminine needs, more. It is cluttered, but neatly arranged.
She has access to electricity, which the community organized after they decamped here after the EQ. To participate, she pays 500 goudes per month, about $6.50 or so US. This amount is at least a day and a half of her wage in a textile factory.

The electricity is mostly reliable…Marline turns on the fan immediately and invites me to charge my cell phone-cum-camera-cum-email-cum-contact-with-outside-world. I am relieved at the offer.
She moved here to Delmas 6 not only because her former home was inhabitable, she says, but also because this place was a lot closer to work. And cheaper – instead of having to take 2 tap-taps (small buses) for 10 goudes each, she only had to take one. She now shares her place with Yvon, her fiancée.
Tonight and tomorrow, we also will stay with them – Madame Klo and myself. Marline tells me flat out that Klo and I will have the bed, she and Yvon will have a mat on the floor. I know enough after 10 years of hospitality in Haitian homes that I can’t protest this arrangement.
The bed, I note warily, is a narrow cot. A very narrow cot. But then, my team member, Madame Klo, is skinny enough. We will degaje.

Somewhere in my backpack, I have Melatonin or valerian. Or both. The better to sleep with in shared beds and tight spaces. Fan, or no fan, I know it will be hot. I also know I am no good on no sleep. I come to Haiti prepared.

A few other things I need to know. Marline nods, picks up a folded clean sheet and tells me to come with her. Careful not to fall into the sluice, the pit holes

Marline is now 4 months pregnant. Yvon is madly in love with her. She’s the breadwinner, as well. They will degaje.

For about twenty bucks a month, the place is a steal.

He works as an electrician at SONAPI, not in a factory. His wife is working in ti komes, her mother lives with them, and they have two small children not yet school age, for which he is thankful.

Yet, this will include a meal for the student.

Most schools in the city, and smaller cities, as well as those with sponsors such as Haitian churches or churches “lot bo” provide ay least one meal for the students.

Also in the center of town, there are always rooms – some rather dungeon like, without windows, with dusty smells. I was welcomed into one and shown the electric socket, the television, the boom boxes, the fan. A small table with deodorant, bug spray, soap, a hand mirror, toothpaste. A chipped cup with a toothbrush. A chair with a worn towel. We listened to music and talked about work, working. He has a job in a Petionville restaurant, so he gets a meal in addition to a daily wage. He and his friends, who work as gardeners, pay about 500 goudes/month minimum (just about $6.50 US) or about $150 US per year for such rooms.


This is the high rent district. A one bedroom attached townhouse at Delmas 40B is $10 000 ht (50 000 gourds or about $1250/year) a year. So, yes, that is about a hundred bucks or so a month. Four adults live here; before the EQ, it was five. No one here is working. Before the EQ, one person worked and had paid the annual rent in advance.

Mom and Dad are in their 60s; the remaining adult sons are in their twenties. One son is finishing a graduate program in business; the other was accepted into a top medical school in Haiti but could not pay the tuition.

How will they manage? You have questions? They have answers: lot bo dlo.