Outside of the capital,
some 20 or 30 miles,
but light years away
from the, er,
sophistication that is Petionville,
if not Port au Prince, the village tailor sits in front of his sewing machine. 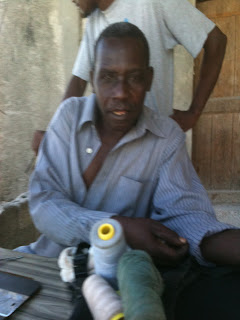 It doesn't work and neither does he.
But I take a chance to pose a few questions.
Heck, yes, he'd take a job (again) in a textile factory - he used to do that work many years ago. If they had a factory here, out in Darbonne (Dabon), he could work here. Living in the city is too expensive, he says. And it is not safe. "Anpil vole," "Many thieves." "And they kill you, they kill you for whatever you have in your pocket," he adds. But, he says, "Not all the thieves are bad people, you know? They just need to be able to feed their families, so they do what they have to do."

He reminds me of another Haitian saying, "Degaje pa peche," "Doing what you have to do to get by isn't a sin." I am not sure this covers murder, but it certainly sounds like being a Robin Hood meets with approval. 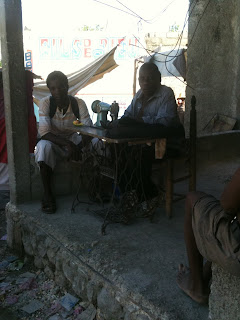 Then, Toma sings out a new jingle he heard in the capital: "If you don't give me Cash for Work to save my life, I will have to rob, kidnap, break into homes, so I can get a little money to give my wife..." Something like that. It sounds good when he sings it. We all laugh, the tailor, the young men, Toma, Destin and I.

I get another flash of insight: the Cash for Work program, it was actually meant to curb riots, theft and murder, to protect the Haves and the Have Mores from the Have Nots!

It isn't really a "Works" program - although all the NGOs and churches from here to Kingdom Come are involved in it. It is a revolving means of getting some money in circulation so some people could have some income to buy some food to eat some of the time. Such workers work 6 days a week for two weeks, then someone else rotates in. Such workers have means to buy food more of the time.