Working to Live, Working to Eat: He sells Fresco from a Cart 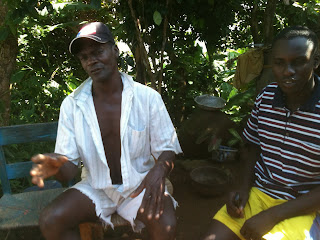 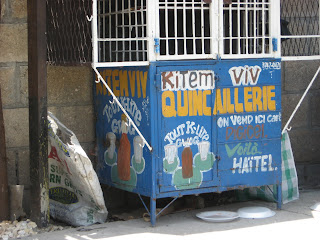 For many years now, Mesye Edwa has divided his time between his city job, selling fresco drinks from a cart, and managing his corn and bean fields and ten children up in the mountain zone. Madame Edwa has been a ti machan this same time, in between pregnancies. In the photo, Mesye Edwa sits with me just outside his home in the mountains, with the oldest son, Ronny. This summer, the earthquake and the recent death of one of the older sons, Nelis, brings everyone back to the mountain home, stunned.


The family had put a lot into Nelis’s training as an auto mechanic, and the purchase of tools for his trade. Nelis has also worked side-by-side with his father, and, trucked the drinks when Mesye Edwa was in the countryside.

Then he tells me that of course he doesn’t eat like that every day. They “degaje,” and spend what they can, so they have enough to get by.

I do not get his estimate of any “benefis” or profit he makes. He makes enough to meet his expenses, he says, to pay back the extension of credit, and enough to eat, for himself and Nelis.

No one makes any claims to profit or savings. Again.
I ask Toma about this. He tells me he finds it puzzling too, after hearing this so many times. But then he says, it is true. People make enough so they can eat, and that’s that.

So, do they stop selling, or trying to sell, after the break even point? Surely there is not much point in hanging onto much cash – it is likely to be stolen unless you actually invest it in more calorie intake for yourself.

From Edwa, and other folks selling on the streets – the water vendors, the pate sellers, the hawkers of peanuts, soap, shoes, toothpaste – I begin to get a picture of these workers trying to get by.

They try to sell as much as they can in order to make it to the next day.

Or so they would have me conclude.
Posted by Randy at 11:33 AM